Skip to content
May 17, 2018May 17, 2018 carpeabsurdoLeave a comment
Part Three
After recovering the dogs, we were faced with some decisions. The storm that had rolled through was a smaller part of a massive cold front that had descended across the west, and two feet of snow had just been dumped at home. We now had to choose where we could camp based on temperature. We stayed at a motel that night and took a survey of tourist cards in the lobby display rack. “Well, I’ve always wanted to go to Tombstone” . . .was how the conversation began.
And to Tombstone we went next, but not before staying the night camping in the Verde Valley. Which I only make note of, because as we drove into the middle of nowhere to get to this campsite, we randomly turned down a road that looked promising with some fire rings. We got out and walked to a picturesque clearing, as the dogs impaled themselves on prickly pear cactus, and decided to set up camp while watching a beautiful Arizona sunset. Working our way back to the car to get our tent became more interesting when we came across a full ritual circle complete with burnt out candles and some type of animal skull. Next to it was a perfectly laid out yin and yang symbol make of rocks. At least they were peace loving, new-agey seancers? To make matters worse, at roughly 1am a car pulled up out of nowhere, left the engine running, I heard someone get out, walk over to our tent, and started shining a light all around our campground. I woke up Jason and we listened until finally, whoever it was, walked away, got back in their car, and drove off. I’ll pass camping there again.
South of Phoenix looks like the apocalypse. We went straight down towards Tucson, which I honestly couldn’t find much merit in. At any moment I was sure Mad Max would be pulling up along side us and harpooning poor Hilde. We toured the defunct Lisa Frank factory, terrifying in it’s emptiness and ruiner of my childhood dreams, the weird airplane grave yard that goes on for miles, and imbibed on my total disappointment of Whattaburger, which Jason had talked up concerning his drunken post-army nights. We continued on. 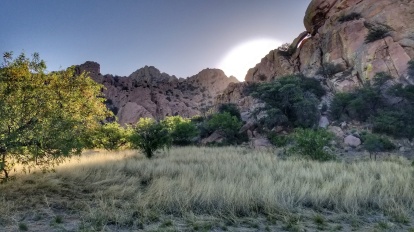 They let us dress the dogs up as bartenders 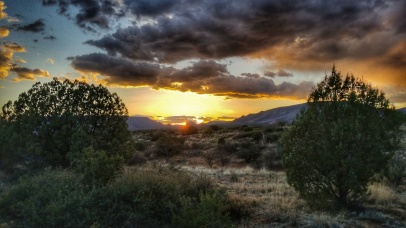 Ominous sunset
Tombstone held a number of surprises for us, one, including it’s higher elevation and surrounding grasslands. We had no idea how beautiful that area was, considering the wastelands just north. Next, was the fact that everyone in the city preferred to dress up in historical costume and play their parts, even at the bar post-work. Also, the regular “gun-fight” performances. Also, this seemed to be the place were biker gang members came to retire. The locals looked rough. We walked towards a western display town with a raised wooden walkway where some guy (dressed in western attire) was drinking a beer and smoking a cigarette. We had the dogs with us because Jason didn’t let me smother them, and the guy pointed out how cute he thought Henry was and how he reminded him of his dog that just passed away. I made my typical snide comment about trying to off Henry, which probably wasn’t sensitive or appropriate, when the guy suddenly got very intense and serious. “WELL. MY DOG DIED IN A VERY AWFUL AND PAINFUL WAY.” Uh-oh. That sounds just terrible! Tell me more? “YEAH. THIS LITTLE CHIHUAHUA KEPT TRYING TO BE ALPHA, AND THE OTHER DOGS DIDN’T LIKE IT. I THINK IT MUST HAVE BEEN PACK MENTALITY, BECAUSE THE DOBERMAN IS USUALLY FINE, BUT THAT ROTTWEILER RIPPED INTO HIM AND ALL THAT I FOUND OF HIM WHEN I GOT HOME ONE DAY WAS HIS HEAD IN THE FRONT YARD. Did the Doberman have blood around his mouth or just the Rotty? Why do I think of these questions? Why did I just ask him that out loud? It’s like the time when we had just started dating and I asked Jason if human meat cooked red because we have so much iron in our blood. Or did we cook like pork? Why does pork cook white? I wish I had signal. I swear I’m paying attention. WIFE WAS REAL TORN UP ABOUT IT. BOUGHT HER A TEACUP CHIHUAHUA A FEW MONTHS AGO AND SHE TAKES THAT THING TO WORK WITH HER, EVERYWHERE REALLY. LOVES IT. ANYWAY, LET ME KNOW IF YOU WANT TICKETS TO TONIGHT’S GUNFIGHT. IT’LL BE GREAT.” That’s exactly the kind of shit you hand a cocktail and parade around the front porch. We thanked him for the offer, found a bar with some delightfully saloon attired waitresses and some dude that looked like he just came from Burning Man, and made way to our campsite.
Part four to follow
May 15, 2018May 17, 2018 carpeabsurdoLeave a comment

Recently we embarked on a two week road trip, that inadvertently had us discovering much of the American Southwest. We packed up our camping gear, backpacker packs, and two small dogs into the Jeep (Jason thinks her name is Bertha, but I personally think she’s more a Brunhilda. I call the Jeep Hilde for short.) Our true aim was Havasu falls, which we had managed to secure permits for.
Our journey began from our small mountain town in Colorado, and took us west to our first night in Moab. The balmy 75 degrees was a relief from the sleet/snow we’d been experiencing, which was wonderful right up to the lighting strike directly in front of our car followed by a torrential downpour. The fur beasts fought, positioned, and dominated for best seat in the back, with Henry largely serving as co-captain. A beautiful sunset and blustery night later, we continued south down through Monument Valley. As we neared the beautiful towering rock, we slowed down noticing something strange in the middle of the road. Hoards and hoards of Japanese tourists had descended into the middle of the highway and were laying down in the center of the road for group photos. When they sensed our approach, or their imminent doom, they scurried from the road just in time for us to see a film crew roll past us on one side, while a large group of runners passed us on the other recreating the iconic desert scene from Forrest Gump. Because why not. Meanwhile, the dogs went ape-shit in the back, because naturally they need to warn us there are people near by, or when people dressed up as movie characters happen to be collected en masse in the middle of nowhere. Rather than stop, we made a quick exit from the area and continued south towards Tuba City, straight to our lord of saving grace, Kentucky Fried Chicken.

NO. STAY IN THE BACK.

Are we there yet?

This spot is perfect

Monument Valley
We made a quick stop at the Flagstaff REI. Where there is a Wholefoods and REI, there will be white people. Us being a set of them. Show me a BD’s Mongolian BBQ, and they will come. $500 later, and almost purchasing an additional $100 worth of PFD’s for our dogs, we were on our way. I’m a little fuzzy on what happened next, but we stayed the night somewhere vaguely north of Sedona in the mountains. Maybe it was one of the vorticies that messed with my perception, I dunno. What was not messed with, was my sense of all the immaculately dressed little old ladies with their short white hair cuts that seemed to flood the town, taking in wine tastings, the austere beauty of the location, and the overpriced southwestern trinkets that were in abundance in every town within a 1,000 mile radius of us. We smashed a penny and I was happy. Onward! We stayed the night near Williams, AZ, and camped nearly on top of the old Route 66, which was weird. Williams was a trip. Jason had arranged for the dogs to be babysat for the one night we were in Havasu, so we tried to stay close for easier morning drop off. As we pulled into the area where we could find camping, we passed an old coach bus that had clearly been there for some time, complete with makeshift lawn furniture and decorations. I sincerely hoped nobody would come slash our tent in the middle of the night convinced we were after their meth. However, Jason managed to break the tent anyway so we saved them the trouble.
The next morning, as we pulled into the driveway of the dog sitters, we couldn’t help but notice all of the “Cavalry Baptist Bible School” signs that were stored next to the driveway. As soon as we entered the house, Wookie knew exactly what was up and starting barking and pawing at me fervently. A mountain of dog toys waited in the living room, and three large basset hounds erupted from the kitchen. Despite the scripture quotes decorating the walls, they seemed nice enough, and we escaped any biblical conversations. And at this point in the trip, I was happy to be rid of the boys. Hell, teach the dogs some scripture. Anything to make them fight less in the back seat. With that, minus a trip to a gas station bathroom later, we made our way to the Havasupai reservation.
Part 2 to follow